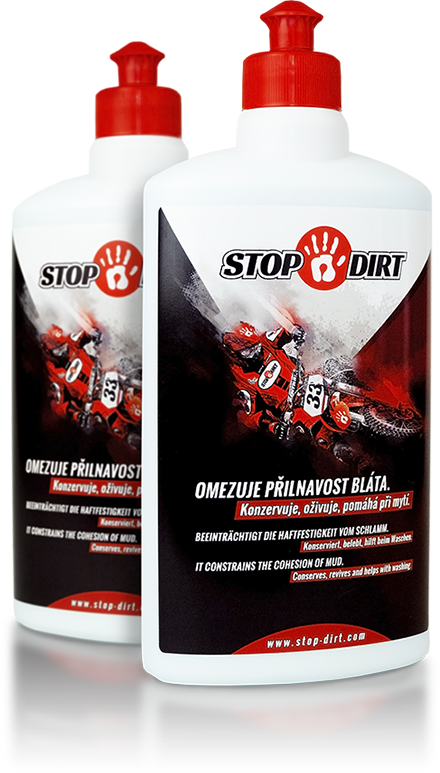 Professional care for your machine.

The concentrated product is developed specifically for motocross and enduro but is generally suitable for MOTO, QUAD, and CYKLO sports. It is an emulsion (water paint) of a pale blue colour and "oil" density with a pleasant smell. After the evaporation of water, only the active ingredient, film, remains. STOP-DIRT is unique in its concept, perhaps closest to products from the area of "Motocosmetics, Cyclocosmetics..."

Are you a motocross or endurance rider or another rider or mechanic? • What if the washing of motorbikes or wheels went faster and easier? • Do you like maps of water and dirt on your machine? • Do you want everything to shine as new? • What if plastic and sliding elements were treated at the same time? • Do you also want to treat your equipment? • Do you wish the mud does not stick to your machine so much? • Do you want less mud on your bike? • Would you like to have a lighter bike or bike ride in the mud? • Do you mind scraping mud from a motorbike? Then definitely use STOP-DIRT! With one concentrated STOP-DIRT package (500ml), you can treat up to 40 off-road motorcycles! (cca 150 bicycles) We offer security guarantee for your purchase of STOP-DIRT 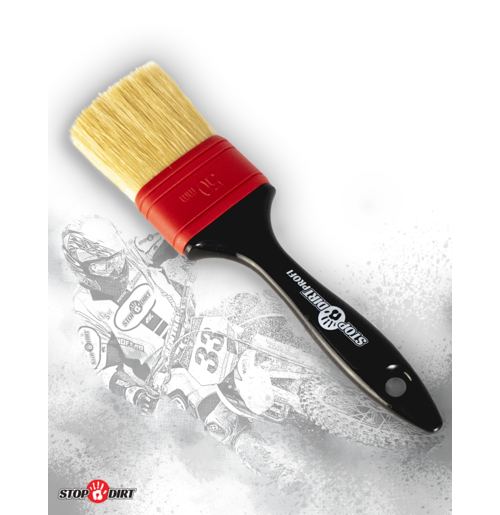 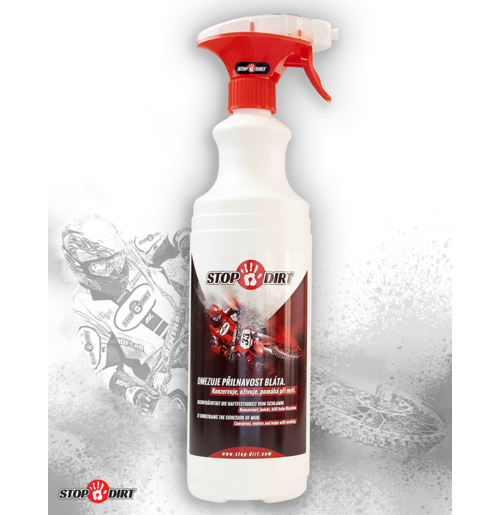 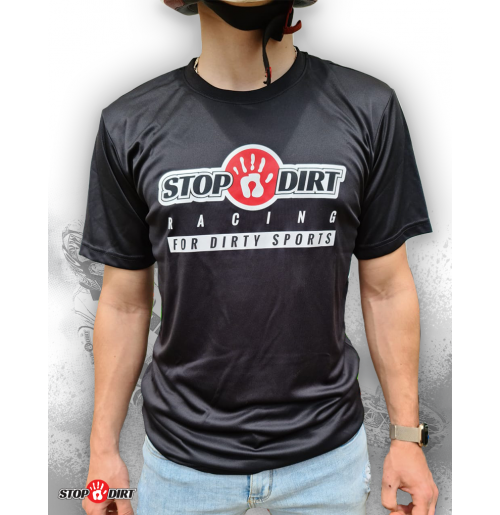 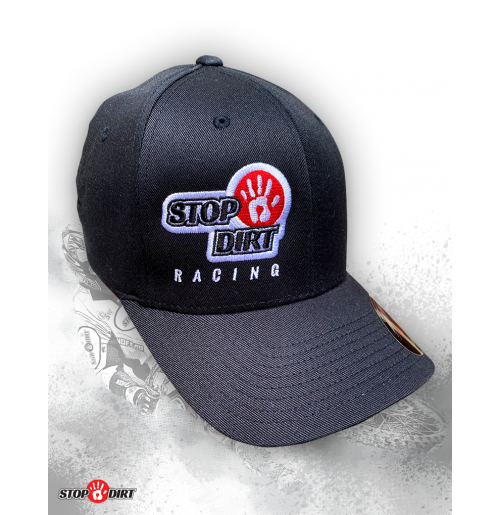 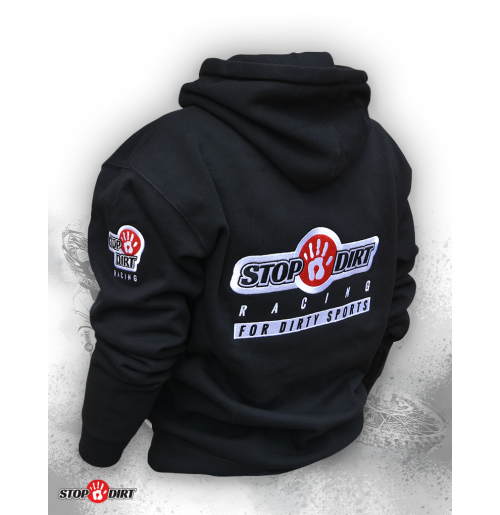 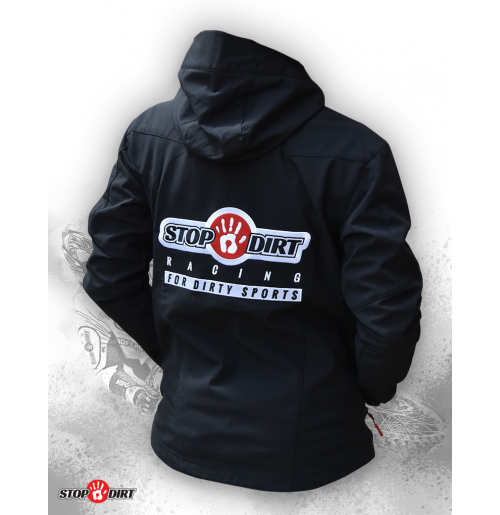 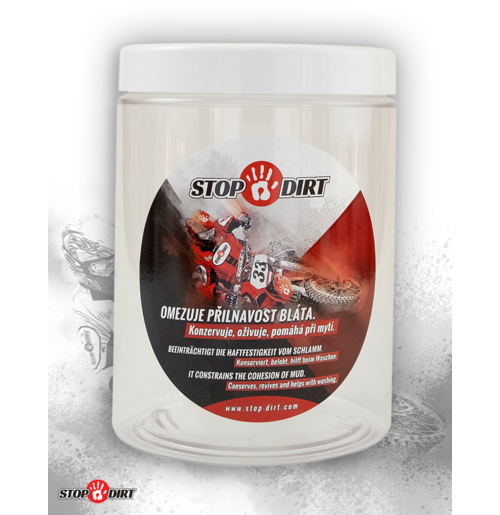 What is the product for?

It serves all riders and mechanics to facilitate their day-to-day work with very frequent machine maintenance. To save time and money, especially when frequent washing and general care of the machine. The result is greater comfort and fun in these challenging sports.

Examples of possible application: • on frames • on plastics • on active parts of silencers • seals • on rims wheels and tire hips • on hoses and hoses • on motor and cooler covers ... etc but also • on helmet • protectors • on top part of shoes (not on soles!) product detail. STOP-DIRT also has good lubrication capabilities due to its excellent sliding properties.

The basic feature of STOP-DIRT is its effectiveness. The main advantage of STOP-DIRT is the possibility of brush application, where you control the maximum accuracy of the application or the sprayer when you control the dilution method. So you have all the options to apply the emulsion quickly, easily and precisely to the desired places, which is difficult for sprays. (Spray produces a gentle aerosol that spreads uncontrollably, is all around and stays where it is not desirable).

Composition: This product does not contain any solvents or acids, does not damage any surface or material with which STOP-DIRT is in contact. (STOP-DIRT is an emulsion of polysiloxanes dissolved in water with technological additives).

STOP-DIRT security guarantee:
We provide you with an extended period of time for the possible return of Goods without giving any reason beyond the statutory time limit (see paragraph 5.9 of the Terms and Conditions) for a period of 6 months from receipt of the Goods. 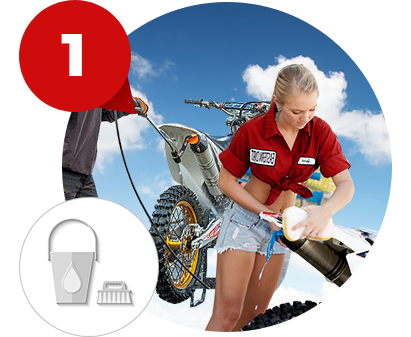 Wash
Wash your machine in the usual way. Ideally, if the machine is dry before using STOP-DIRT. But it is not a necessity. After each drying, the "water maps" remain on the machine. With this, STOP-DIRT will also cope with it. Just as it works with worn-out plastics and rubber. 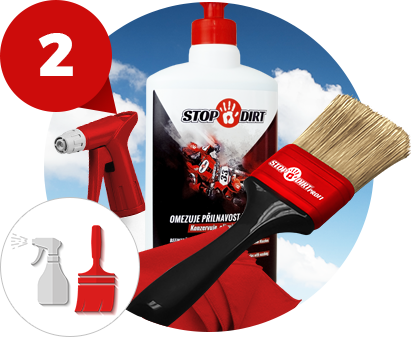 STOP-DIRT is applied to the cleaned surface of the machine by a spray gun, brush or a clean cotton cloth
(we recommend a sprayer / brush combination). You will soon see how to read it. STOP-DIRT can be diluted as needed with clean water. Apply STOP-DIRT to required machine locations. Apply STOP-DIRT with regard to experience with mud slamming at the site or apply STOP-DIRT for design use or lubrication of sliding parts, product detail. You can use the different densities you can dilute yourself. 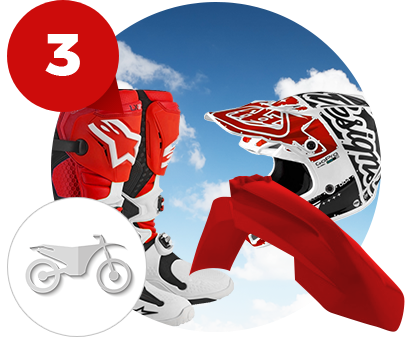 Ride
STOP-DIRT tips: 1) If you are going to give more layers (especially against mud), ideally let each layer slightly load up to achieve a better result. 2) For design use, the surface can still be "polished" with a cotton cloth. 3) STOP-DIRT dilution is very individual and intuitive, depending on the way and experience of using STOP-DIRT. Therefore, test the STOP-DIRT and choose the most efficient way of working with it and using it, just for you, your conditions and your machine or gear.
Caution: Do not use STOP-DIRT in places where you need a good grip (brake discs, saddle, grips, legs, etc.), STOP-DIRT is very slippery.

STOP-DIRT is a product that has been developed and tested in the motocross conditions.

Speaking of STOP-DIRT, we are talking about the idea and vision of many years ago, reworked in an excellent product that effectively helps in the day-to-day maintenance of sports and racing machines. The idea of STOP-DIRT, however, was only implemented in 2013.

Mud is good as a base for riding, but not on a motorbike. Who should scratch and wash it then? These day-to-day routines were a simple reason for a project that was not so simple. The idea of the STOP-DIRT project started in 2013. It was followed by a lot of work by professionals as well as great fans. Within three years, the product "STOP-DIRT against the mud" was born. That was not the end - we have been testing and tuning STOP-DIRT for the next two years. Testing STOP-DIRT took place both personally and together with motocross friends, friends around bike sport and other dirt enthusiasts. We "fiddled about" with STOP-DIRT together and today it has, in addition to its excellent features, its characteristic colour and aroma. The next year was its launch on the Czech market and we are now working on launching it for the European market. We also work to support STOP-DIRT by developing other tools, such as a special plastic paintbrush. It protects very delicate surfaces such as varnished carbon fibers against unwanted scratches. I believe you like STOP-DIRT just the same as we do not get away with it.

Even though STOP-DIRT is a special product, its use is very versatile - try it too!

Instructions and the Safety Data Sheet are available for download at the bottom of this page.